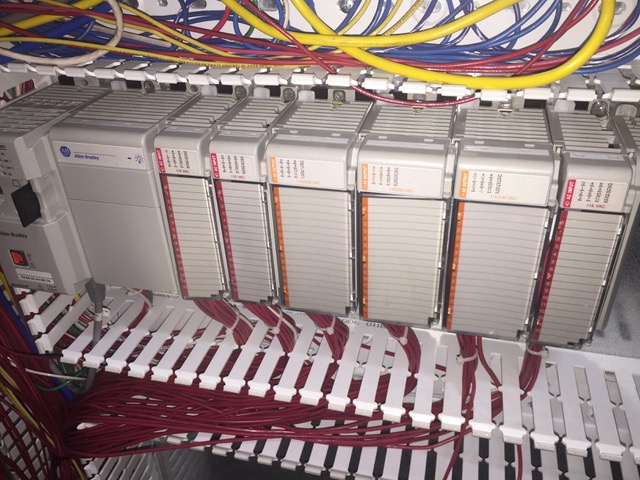 Took another conveyor system that went thru load, shot blast, paint rooms, cure ovens and unload from a single 5/03 to three panels with separate Compact Logix processors, touchscreens and new VFD drives.  Broken into 3 panels for line maintenance and repair reasons, customer had issues with taking down multiple functional areas for a problem requiring lockout/tagout in one specific area.  Total of 6 new CompactLogix processors to replace 3 SLC5/03 processors and 1 SLC-5/04 processor.

New electrical schematics generated to show new I-O cards and revised e-stop circuit which moved to a 440C-CR30 programable safety relay with added Ethernet card for integration into the L33 ladder logic and alarming/display on Panelview7 Plus displays.

With new hardware in place CAI was able to implement several concepts for decreased thru put time and quality tracking.  Customer wanted to be able to track how long a part had been inside of oven, at what position when and what the temperature was at that location.  Under prior scope of work CAI had installed thermocouples for logging temperature at each hanger location thru the oven cure sections using a Rockwell CompactLogix platform.  This temperature data was shared with each oven conveyor PLC (Producer/Consumer).  Each hanger in system a SmartEye bar code plate was attached to each conveyor hanger. Customer drove the selection of a SmartEye hardware platform that matched similar systems that customer had on other lines in plant.  CAI provided and integrated the SmartEye hardware and AOIs into PLC logic and data tracking schemas.

The SmartEye has unique hardware level advantages and the reader is directed to http://www.smarteyecorporation.com/ for more information.